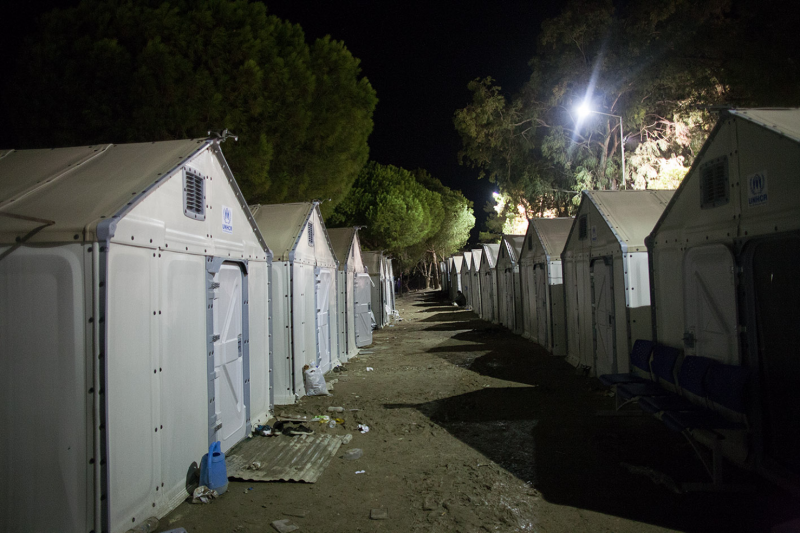 I smile for a moment, hoping this light will shine through me in my next interaction, and then I knock on the next hut door.  “Hallo!  Good Morning!”

Moria Refugee Camp, Lesvos, Greece – Most days in Moria, I fight back tears that seem to come at the most inopportune times.  I’ll be walking, and something will hit me.  Internally, it feels like a cartoon character getting an anvil to the temple, shaking me through and through.  My emotions jar me when I have a moment to think, to realize, to process.  When things are crazy, it’s almost easier.  I go through motions, I move from one thing to the next, I have a goal, and I concentrate to deliver.  Walking from one place to another, there are moments for the mind to catch up and the reality of what’s happening to sneak up and grab your heart and squeeze out the depths of what has been tugging in the periphery.

Today, it’s the man.  The one with the slightly graying beard and the kind eyes.  The eyes that looked at me unsure of what to expect.  Was I there to truly help, or was he just a drop of water in a sea of basic needs?  He was next in the mob-like queue for accommodation.  I was next available to help.  “Suri? (Sounds like Soo-ree)  How many?” I asked.  “Are you Syrian?” I’m asking.  This was my regular conversation starter as the crowds gathered, looking for shelter for the night.  Sometimes I would put my fingers up to start counting or start pointing to their party and counting and then put my hands up in a questioning gesture.  We constantly play charades like this, hoping the other person will put the puzzle together to pair needs with solutions, questions with answers, instructions with understanding.  This man and I bumbled along with his broken English (thank heaven for small mercies) and my wild gesticulations.  He had a family of eight, was from Syria and had a male child that was over the age of 18, no small children.  These things all qualified his family for one of our little huts (rather than the “family compound”), where they would be combined with other Syrian people they likely did not know.  They did not qualify for a place with a heater because they did not have any medical issues or small children.  As we muddled through the questions, and I explained the accommodation I could give his family, he began to understand how we were triaging the need.  He led his family to the plastic hut and warmly thanked me for my help.

He was just a regular man, but there was something in his eyes that touched my heart.  He had a sort of peace and stability and authenticity about him, and I thought I saw something else, akin to duty.  He was the provider or patriarch, trying to do what was best for his family.  He looked as though he should have had the means to purchase accommodation rather than packing his family into a hovel with 8 – 10 other people.  In other situations, this man could have afforded heat and privacy and in-room toilet and showering facilities.  In spite of this, he was fatherly and caring to his family, and yes, grateful to me.  I felt warmed, in spite of the cold air that afternoon, from the interaction.

After a few minutes, he was back again, and he patiently waited for me, while others were being helped.  I approached him, worried that I had not properly explained how they must share accommodation with strangers.  After all, it was mostly hand gestures and a few English words here and there.  As I approached, he put his hand around a man standing next to him.  He explained to me this was another family that needed my help.  He stood patiently with us and acted as interpreter as best he could.  He walked with us to the hut where we placed this new man’s family, and he explained things to the man in Arabic.  The new family thanked me for my help and we all smiled and bowed our heads to one another.

I walked back into the office hut to update the team member in charge of accommodations.  I stepped back out, and the man was there again, this time with another family.  We smiled at one another and muddled through more housing for other families.  We did this again and again, and I could see the man was determined to help until all of the families had housing for the evening.  At the end of the shift, we said our goodbyes, and I thought my gratefulness must have exceeded his own.  Here he was in a situation that did not seem to match his intellectual capabilities, in a situation where he was unsure, and yet, his inclination was to help others, to bridge a communication gap and make sure those with a need had them met.

The following day was when it hit me.  Walking through camp on morning duties of rousing everyone to vacate the huts for cleaning, this man was already awake, and he lay prostrate in morning prayers.  Our eyes met briefly as he pulled himself up and looked toward heaven giving thanks.  This man, who kept giving and giving and giving the night before, who had based himself to living below his means in order to protect his family, had now risen before the rest of the camp to give thanks.  This man gave thanks in spite of the lowliness of his current situation, in spite of the enormity of his need, in spite of the immense familial responsibilities he carried, in spite of the horror he had faced that had caused him to leave his familiar home and in spite of the scary unknown he had yet to face.
In that moment, I had to stop, take a deep breath, hold back the tears and say thanks myself.  For I do not carry the weight this man carries, and I have more than I could ever need, and my future, while unknown, is heavily weighted in favor of my success.  I pause to ask for the strength and the heart to be a little more like the God I can see in this man, expressing thanks for having met him.  I smile for a moment, hoping this light will shine through me in my next interaction, and then I knock on the next hut door.  “Hallo!  Good Morning!”  I realize again that while I thought I came here to impact a few lives for the better, they are actually changing me in ways I hope will last a lifetime.