The photo that finally made the West wake up: 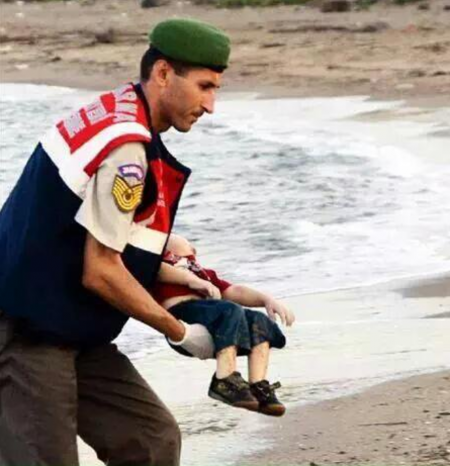 If you had told me a year ago that Facebook would become a critical communication tool that I’d reach for first thing every morning, I would have laughed at you. But, here I am, reaching for the phone before my eyes even open, to see what aid workers were up to in Greece while I slept. Yesterday’s “memory” from this date last year was a post I wrote about a now very famous photo.  I didn’t need a reminder for this one. That photo changed how I look at everything. Why?  I’m not exactly sure. Part of it was that Aylan (the boy in the photo) looked an awful lot like my own little boy. But, there was something else, too. It made me take a hard look at what was really important and how I lived my life. It made me feel ashamed that, up until now, I had felt ok about ignoring the fact that other people in the world desperately need help. Their story, and the story of all of the others who had fled made me realize I needed to do SOMETHING. I just didn’t know what.

A closer look: Andrew Baron gives insight into the power behind the photo

Fast forward to Christmas time. I had set up a monthly donation to the Greek Red Cross. I searched for some other organizations, looking for an opportunity to do more. I didn’t really find much until a friend shared an article about “Carry the Future”, a grassroots organization a woman in California had built in just three months. The fact that they had teams going to Athens to distribute carriers had me really interested, and then I found some Facebook groups full of people that had been going to the Greek islands for months to aid refugees. Turns out, a lot of volunteers and organizations were also there because they had been so affected by that photo of Aylan. That was it. I knew I had to go.

Then, during a holiday dinner with some friends, I found out that a couple of them were eager to go as well.  In February, we packed our bags with donations and flew to Lesvos. One thing we couldn’t help but notice during our trip was all the effort needed to sort donations, and how much of the stuff was unusable or inappropriate.  The clothes and shoes were needed so badly, but getting the right items sorted and distributed fast enough was a challenge.  So, when we got back in town, we decided to have a go at collecting stuff and sorting it here before shipping.  I mean, everyone here in the States has so much stuff.   Plus, we thought it would be great to keep volunteers in the field and out of the warehouse sorting donations.

Since Aylan, hundreds of thousands more people have made that crossing. Thanks to volunteer rescue teams, the rate of deaths has been curbed since Aylan’s dinghy failed. But sadly, they aren’t able to save all. In February, the borders of Europe closed abruptly, leaving upwards of 40,000 refugees stranded in Greece. Shortly after, the EU made a deal with Turkey that proposed to deport those not meeting the requirements and nearly stopped the sea crossings to Greece. Open transit camps became detention facilities. Thirty-plus official camps and more unofficial camps and squats have sprung up all over Greece, and the arrival numbers are slowly but steadily rising again.

On the home front, No Place Like Home has earned tax-exempt status, we’ve started shipping aid, and we’ve successfully made connections to handle distribution for us. With sufficient funding, there are so many ways we can make a real impact in the relief effort.Things that haven’t changed: The conflicts in play last year are still going strong, and people fleeing those conflicts still need a lot of help. Large aid organizations and government still fall woefully short of providing the level of aid needed. Small organizations and independent volunteers are still filling a large portion of that gap.

Aylan’s Father today:  “The dying goes on and nobody’s doing anything.”

My hopes for next year (aside from world peace breaking out)? As our donor base grows, we’ll expand beyond shipping clothing and shoes. We’ll help people get out of tents, off the streets, and into real housing.  We’ll help make sure they’re fed, clean, and dry. We also want to help displaced people earn a living while they’re in limbo. That’s a luxury not available most of those wading through the asylum or relocation process, no matter how skilled or educated they are.

We hope you’ll want to make that journey with us! #peace and #safepassage
– Nicole